How to NOT Deal with Criticism and Internet Trolls: 6 Mistakes I Have Made Dealing with Negativity as an Entrepreneur 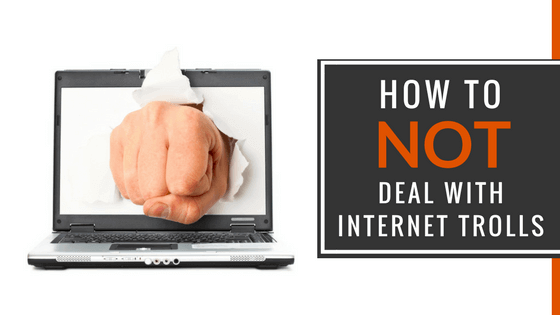 Have you ever watched the show “Scared Straight?” It’s a mess but highly entertaining. The basic premise is that at risk kids go to prisons to be lectured by people who’ve made really bad mistakes in life that landed them in prison.

The prisoners explain all the ways they messed up (usually while screaming at the kids) to try and get them to change their ways to avoid ending up like them.

In this scenario, I’m the person who messed up lecturing you why you shouldn’t repeat my mistakes and what to do to avoid them.

Although I love to write from the perspective of “this is what worked for me,” I don’t have that track record when it comes to dealing with criticism. I’ve amassed a pretty deep catalog of ways to not handle negativity online.

Fortunately, there is just as much value in that as if I showed you how I beautifully dispelled negativity online in stride.

Let’s get into it.

Why Your Response to Criticism, Trolls or “Haters” Matters More Than You Might Think

How you respond to one person goes far beyond that one person and that single interaction.

I used to bark back at “haters” and tell myself, “they weren’t going to like me or buy what I have to sell anyway…who cares.”

How we reply impacts so much more than it seems. It’s essentially a big showcase of our character and personalities to everyone watching.

For some people, that’s a big audience. Luckily for me, I got most of my worst showcases out before I had many followers.

Also, we live in a “screenshot and share” age where even an email thread can become a public showcase of how well or poorly you handle criticism if someone decides to share it with others. If they really don’t like you, that’s pretty likely!

Also, negative word of mouth adds up with interest over time. Poor replies can fuel already negative conceptions and those can be passed on to others quickly.

Here’s what has happened every time I’ve replied incorrectly to criticism.

So, here are the big mistakes I’ve made in handling trolls and negative feedback (which are NOT synonymous).

If I titled this post “How to deal with trolls and haters,” it would have missed a very key concept and might have steered you in the wrong direction because criticism is not synonymous with trolling or hating.

The knee-jerk reaction to someone saying something negative about you or your business is to label them a “troll” or a “hater.”

As great as it is to turn away and just say, “oh forget that person, they’re just hating on me because I’m successful,” it isn’t a one sized fits all solution.

It’s an example of cognitive dissonance. We don’t want to even accept (let alone consider) that we’ve acted out of line with how we identify so we quickly find an answer to why someone is saying we did.

We want to quickly dispel the way that these sorts of comments make us feel. So, we slap the “hater” label on and move on with our day.

But what if we are being tacky? Wouldn’t you like to change that? This could be that chance!

What if you did fall into a promotion that comes off as a quick money grab. Wouldn’t you want to consider that maybe you’re actually harming your reputation since others might feel that way too? Isn’t it worth at least considering it?

What if your audio IS bad (it probably is, I’m speaking from experience here). Wouldn’t you like to fix it?

Quickly labeling negative comments as hate is a very mentally lazy approach and a missed opportunity for growth.

Yes, that means a little bit of pain and ego-deflation but we know how it goes. “No pain, no gain.”

Yes, we need to know the difference between constructive feedback and flat out mean spirited hate but it’s often far less clear than it appears on the surface.

Many of the people who say negative things aren’t actually haters. Lots of the time, they actually have truth to what they say, regardless to how aggressive they decided to deliver it.

I should have taken more inward reflections after experiencing these “haters,” rather than writing them off (the easy way).

As uncomfortable as this is, I’m working hard on it and I suggest that you do too.

If someone is insulting your looks or things you can’t control, ignore them and move on. I know this is much easier said than done, but the thickness of your skin can be the x-factor to how far you’re willing to go in business.

Do I really think I’m perfect? How narcissistic would that be?

If I’m not perfect, does that change my underlying character?

Of course not, so why do I do this?

I’m working to become much more aware of when I’m doing it and don’t interpret every bit of negative feedback (directed to me personally or spoken/written about me) as a personal attack that represents my entire being. Even when it is legitimate trolling, I shouldn’t let it affect how I feel about myself.

Mistakes happen, it’s our character that we should be concerned with.

Sure, it’s annoying to be nit-picked. It’s frustrating that you can do 99 things right and 1 thing really wrong and the 1 thing gets mentioned. It’s tough to know that some people who don’t know you might see that comment and give it credibility.

But, this is a part of the process.

When we take things personally, it leads to defensive actions, which usually make us look bad.

Nothing says you’ve lost an argument or that it hit a sensitive spot quite like lowering yourself to mudslinging.

Acknowledging a troll is one thing (I don’t suggest you should always ignore them by the way, sometimes that isn’t the best move either), but getting into a heated, public back and forth with someone is making you both look bad.

So guess who wins?

The troll wins because they have nothing to lose. Even if you tear them to shreds, they won.

So, in the event that I feel the need to fireback, I now have a few rules…

Reply rarely and only if there is a chance that it can be positive. “Trolling,” should be ignored and given no oxygen. Misunderstandings can be addressed, but do it sparingly. As you grow, you’ll have more and more to reply to and you will eventually reach a point where it will require almost all of your time. Love him or hate him, Tai Lopez would be penniless if he spent all day replying the the 1,000s of negative things said about him online.

Only reply if the statement is easily debunked. Arguing your business practices publicly to someone who doesn’t like them isn’t worth it, but if someone says something about you that is flat out wrong and you can quickly prove it, I think you should.

If you do comment, never reply publicly more than twice. Real trolls just want attention. You engaging them feeds them and it’s unlikely that they will stop after a comment or two. Seeing a massive subthread of me defending myself is ugly. Don’t do it.

If you do comment, never resort to name calling or cursing. Having 4 kids, I rarely cuss in real life so this isn’t extremely difficult for me but I am tempted to drop some choice words from time to time. Cussing at people online never comes off well. It makes you look aggressive and unapproachable. Even if someone “deserves” being told off, being the bigger person is typically a better look and stings them even more than a few choice words.

If you feel the person is simply misunderstanding you, try to reach them privately, not publicly. People speak differently in private than they do when in front of others. They won’t worry about making witty zingers or defending their stance so much if it’s one on one.

Again, it is still usually best to just not engage.

Mistake #4 Bringing Up the Negative Comments to My Audience

I’ve made the mistake of posting things like, “wow, some people are crazy…” and sharing a screenshot of something someone said about me or my brands.

This could not be more counterproductive or meaningless.

Although it seems like the whole world sees a troll’s comment and we assume that people will care, that’s rarely the case.

How do I know this?

I’ve seen countless negative things said about some of my most respected idols and I rarely bat an eye. Why? I understand who they are and they get the benefit of the doubt. I know that they will have people who don’t like them and that doesn’t have to impact my opinion at all.

Seriously, we’d all hate the world if we took every negative comment said about someone to heart and held it against their character forever.

I consider myself truly successful, so I’m working on crushing my defensiveness to match.

Unless you did something catastrophic that requires a public apology, don’t bring a trolls message in front of your audience willingly.

Mistake #5 Using Social Media Too Much

I’ve long said that if I didn’t run so much of my businesses on social media, I’d be very hard to find on them. Most of us spend far too much time on social media (watch “The Social Experiment” on Netflix if you really want an eye opener on why we do this) and it can become very toxic.

Mistake #6 Letting the Fear of Negativity Slow Me Down

If someone is a true hater or troll, they win when you stop. Many times, they are jealous that you’re doing something that they cannot. Misery loves company and by slowing down what you’re doing because of them, you’re giving them company.

Get in the habit of increasing your output when you receive negativity. Never, ever slow down for fear of what others will think.

Again, this is easier said than done, but you don’t care about easy, right? You want to be successful. This is the process.

Negativity is an inevitable reality of life but even more so when you’re putting yourself out there online.

If you find that you don’t want to deal with it (that’s ok) you should look for other work. Seriously, when you really get down to it, the goal of my website is to help you find happiness. If the negativity prevents that and you don’t want to put in the work to overcome that mindset, you’d be happier pursuing something else out of the public eye.

There’s no shame in that but there is also tremendous rewards on the other side of dealing with pain.

Not letting negativity wear you down is a skill that needs developed and the only way to develop it is through repetition. Repetition in the form of a regular amount of jabs, insults and critical (constructive or not) statements.

Remember, don’t write off all criticism as unfounded hate. Some of it is actually a lesson hidden behind an aggressive delivery. We all make mistakes and sometimes people who mean harm can actually bring positive change if we can filter through the negativity to the underlying opportunity for improvement.

Whatever you do, don’t let negativity slow you down. Keep doing what you’re doing. Monitor your moral compass everyday and as long as that is in order, you can handle things in stride, no matter how offensive or upsetting they seem on the surface.

Remember, we all experience it and we’re in this together.  Hell, I’ll likely even get some hate for this very article

No Result
View All Result